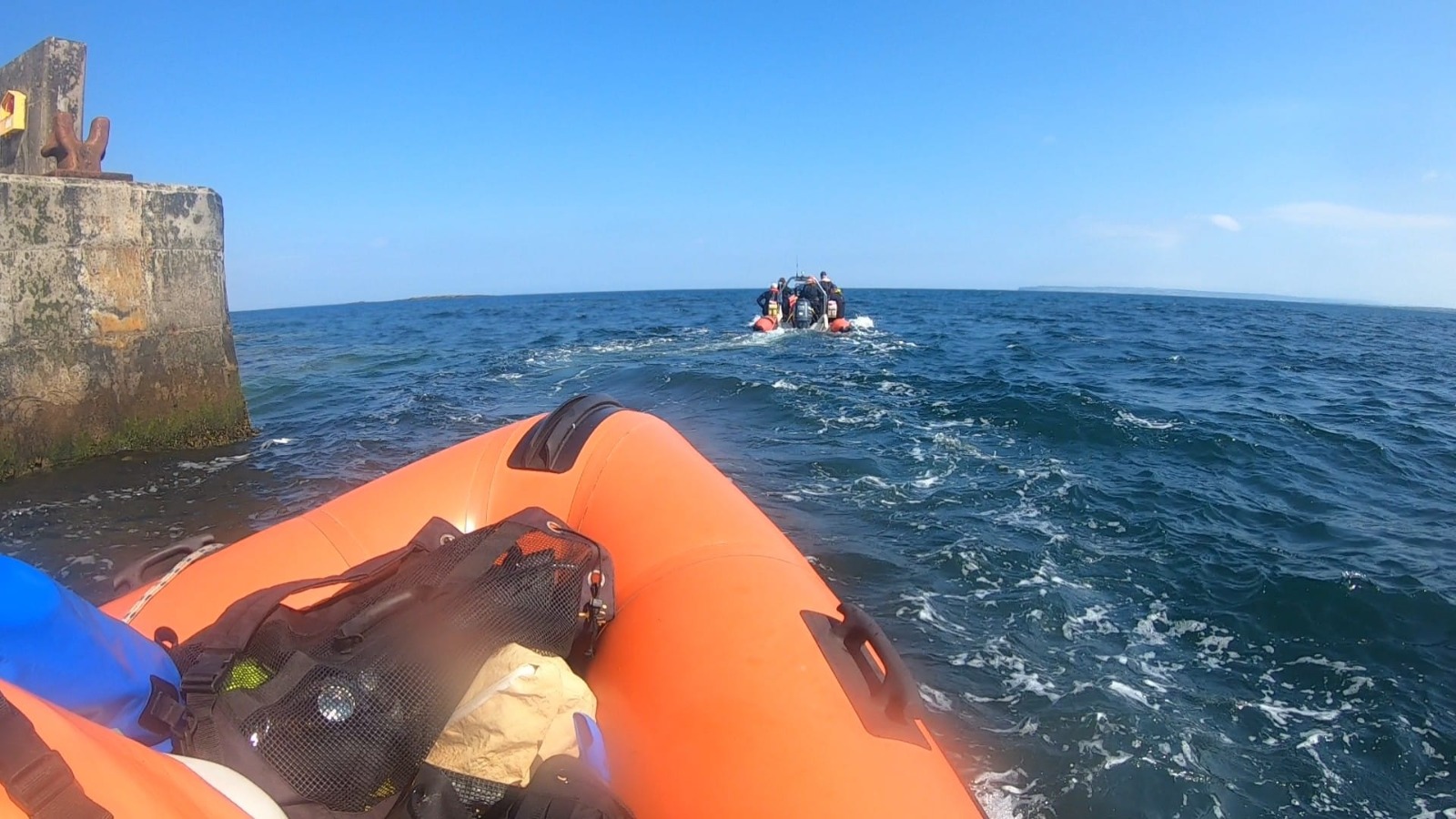 As a ‘relatively’ new member of the Curragh SAC (CSAC), joining the ranks in 2020, the year of the unmentionable, I commence this report by thanking all members’ who work tirelessly to ensure each and every member is safe, gets diving and has the opportunity to learn and progress. The ethos of the club is evidenced in the actions of the CSAC members, ‘safety, get diving and progress within the club. The Quilty weekend was a shining example of this, demonstrating team work, organisation and plain good fun. This doesn’t happen by accident, so thanks to our dynamic DO and diligent assistant DOs, thanks Michelle, Ciaron, and Cristina. Their preparation for the weekend commenced weeks before.

For some, the weekend commenced on Thursday 2nd with Elsie, a canine pal, who kindly allowed her humans to share her camper van. Elsie even facilitated ball games for her humans throughout the weekend, well done Elsie, keep those humans busy.

I arrived early evening on Friday 3rd and at this point our Dedicated DO had ensured that the boats, Lir & Danu were on their mooring. With the boats secure on the mooring, everybody departed to their respective accommodations to get settled. Later that evening a WhatsApp message from Michelle, informed all that a kitted brief for dive 1 was at 10am. I am sure that those who went to the local for the infamous “one” welcomed the chance to get a bit of a lie on.

On the morning of the 4th, the launch of Molly was without drama thanks to the expertise, experience and guidance of Steve and Jean. There was a crew to assist, in response to a request from our Dynamite DO the evening before (observant readers will have copped the ‘D’ theme). In a short space of time crews were assembling compressors, getting RIBS, moving fuel (several times) and kitting up in anticipation of dive 1. Dive details, delivered deliberately, detailing diver groups, destination info, duties and d weather (sorry couldn’t think of another D word) delivered in the drift from the dedicated, dynamic, dynamite DO, determined the dynamic actions for the day (enough of that). The weather looked promising, easterly air flow, gentle seas and even intermittent sunshine. As Irish weather goes, if it’s not raining and the sun shines, it’s a good day. My experience of divers and diving is that, if it’s safe, the dive is on.

Eager divers loaded and boarded the three ribs and headed for Mutton Island North, directly opposite the castle ruins, to dive the steep sided wall (eh, pretty much vertical). As with all dive weekends there was some debate re diving East to West or West to East. It didn’t really matter as the walls were splattered with life, the drops to the depths spectacular, and 30m plus was easily achievable. Yes, I know some of you got deeper and well done, send me a memo. The chatter back on board was one of a bunch of happy divers, reports of Crays, Lobster, Squat Lobster, Soft Corals of assorted shapes and colours. Tom Pots, Wrasse, Conger Eels and I am sure a Whale Shark was mentioned (diving humour of course). Back on shore, boats unloaded the compressors fired up, well two fired, the other flooding, until Steve, a bag of assorted tools and patience fixed the problem. Bottles filled, boats fueled and the brief done, the CSAC were off again. This time to an innocent looking rock popping its peak just above the surface (note, there were also a few not so innocent submerged rocks as Molly can attest to). Innocent enough I thought, we were at what I believe is called Lime Rock (if I’m wrong, another memo will suffice), the dive dropped in shelves to, I reckon up to 50m, while I could see that often tempting depth below, we hung at 30m for the dive. The soft coral was not as abundant as the earlier dive, however, the topography was spectacular. At 16 meters we came across a cave, had it not been for a braver than brave buddy I might have took a peek and legged it. But, my buddy had her adventurous head on and braved a little deeper. Boy was I glad she did, at what seemed to be almost at a right angle, the cave turned and light flooded in from another section of the wall (we have the video to prove it), thanks Aine for pushing on.

Sunday the 5th, more of the same. Divers enthusiastically readying for the day’s adventure and attending to the duties of boats, their own kit and compressors. The brief revealed that the plan was to head for the Blue Hole, a 30 minute or so boat ride on flat seas towards Kilkee. However, Molly (the rib) did not want to play ball and decided to present another opportunity for decision making, team work and impromptu mechanics at sea. The decision was taken to leave Steve and Jimmy with Molly making slow progress towards the Blue Hole, while transporting all divers to Danu and Lir and maintaining radio contact. As mentioned earlier, it’s about the dive. There is a longer story here, but suffice to say, somehow, Steve and Jimmy managed to effect a repair at sea to Molly and she was a right as rain.

The trip to the Blue Hole was as exciting and as spectacular as the diving. We were treated by a large pod of Dolphins to a display of acrobatics, swimming at pace and beauty (and that was just Colm) that divers never tire of. It is this connection with nature that keeps us coming back. Some divers actually spotted a whale, Colm suggested that it was difficult to clarify whether it was a Minky or a Pilot Whale. Dive one was an exploratory one, and thanks to Colin’s information an extremely worthwhile one (probably Elsies idea).

The dive site on the outside of the Blue Pool, Kilkee side and was awash with colour, life, dramatic topography and soft corals. It was one of those dives that you just do not want to end. Unfortunately, all dives come to an end no matter how spectacular. As this was a two dive trip, lunch was had on board the three ribs. Lunch was fantastic, simply put, a culinary delight, personally, I have never had a bad lunch between dives, all food just seems to taste good. The lunch was particularly special as the Dolphins hung around. Tony Ji saw Dolphins everywhere, in fairness he wasn’t wrong, but his excitement and roars of ‘there, there” almost caused me to choke on my sandwich. Dive two was into the Blue Pool, finning West along a stunning wall into the letter box, rising from approximately 16m to 3 meters. I probably shouldn’t have had the extra sandwich, as there was a bit of tank banging going through the letter box. Outside the letter box you are surrounded by kelp and shallower water, yet still beautiful.

All in all, It was a fantastic weekend and typical of all the trips that I have experienced with the CSAC. It is a privilege to be in a position to enjoy spectacular diving with a group of likeminded people.