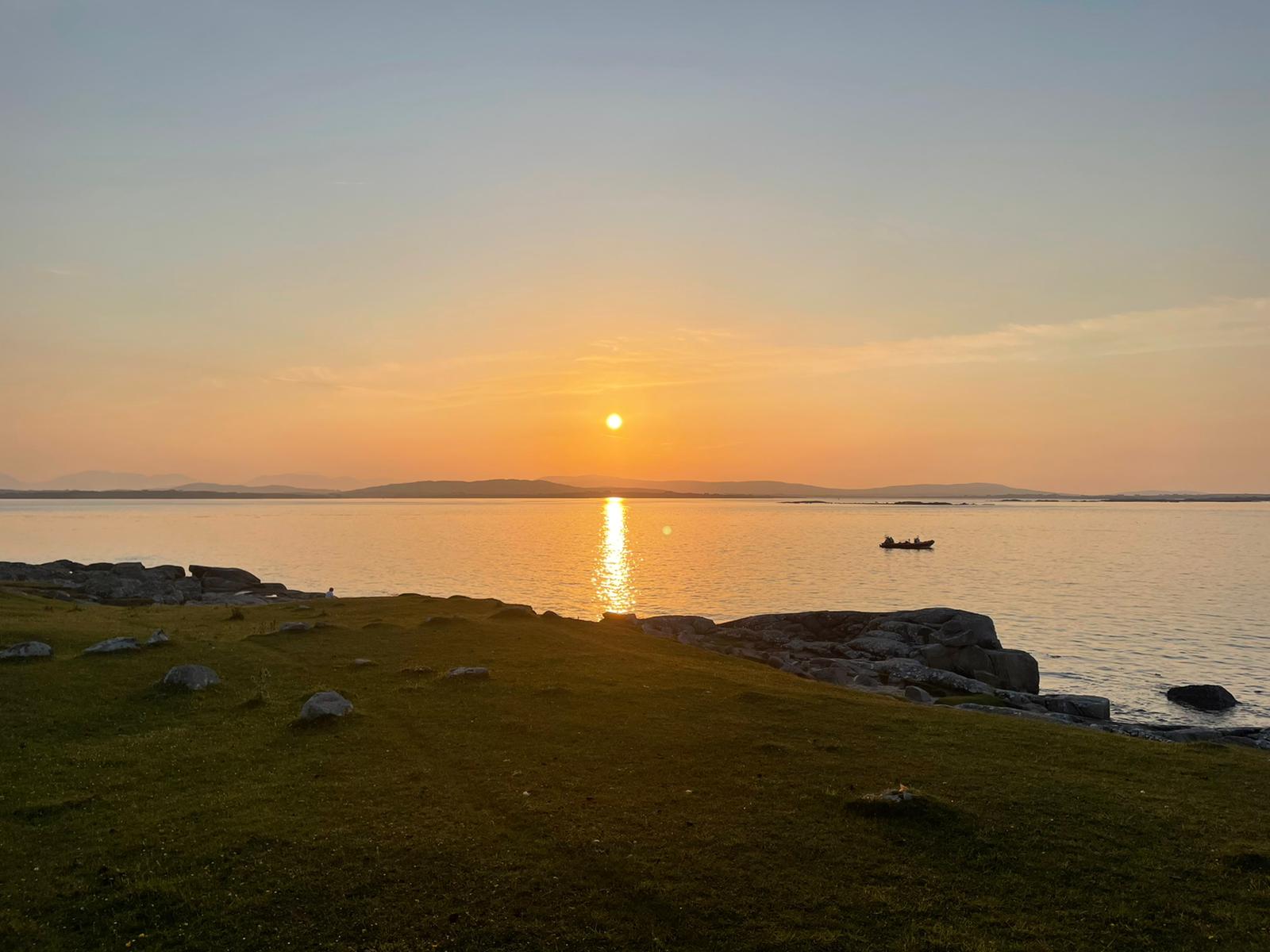 As a club we pride ourselves on being adaptable and adventurous, so with all the covid 19 restrictions, we decided that a camping trip may be a good option for a club weekend outing. Originally, supposed to be a weekend to Roaring water Bay in mid July, (due to a double booking on my part) it turned out to be a trip to Macdaras Island in Galway on the 23rd/26th July.

I was quite nervous organizing this as, with wild camping, there are so many uncertainties and possible pitfalls. However with a lot of help from some experienced and some relatively new campers (thanks Steve Mulhall, Dave Moore, Colm Lowney, Tony Jie and Garfield) we came up with a list of do’s and don’ts for the trip.

When the weekend arrived we left Dublin in the sweltering heat, arriving hours later at Bru na Mara Pier in the most torrential rain I had ever seen in Ireland, the thunder and lightning was spectacular. “Typical” I thought to myself as we arrived, expecting to be greeted by a gloomy group and some mutineers wanting to go home. But, to my delight everyone was preparing to get on with the preparation and packing of boats, climbing straight into their drysuits and in the lashing rain to just do it – they were a determined bunch. We crossed our fingers and hoped it would dry up. Luckily as we neared the completion of the packing of petrol, dive gear including 2 cylinders each, tents, cooking utensils, food, water, briquettes for the fire, rain gear, warm gear, and a few clothes (we were all to ‘pack light’), the rain got lighter, easing off, and stopped just as we got onto the boats to move off. When we reached Macdaras Island the sun was actually trying to shine through the clouds.

As the mooring was being set by Steve and Dave,watched attentively by the trainee cox’ns the rest of the group put up the tents, and started preparation of dinner and the camp fire. After a quick dip in the beautiful bay, by the time we were ready to eat the sun was actually shining. Great food was had, and a beautiful evening sitting by the campfire was enjoyed by all.

On Saturday morning we were greeted to a beautiful sunrise over the beach looking back over the Connemara hill, views you could only dream of, the sea was flat calm and the boats were ready and waiting for the diving to begin. First destination was the Skerds, which is a group of rocks just 3 nautical miles west of Macdaras Island, we dived Skerdmore in the morning and, following lunch there we dived Doonpatrick in the afternoon, the vis was fantastic and the only complaints were about the heat. We headed back to the pier to fill enough cylinders to keep us going for the rest of the trip (everyone brought at least two bottles and some brought 3,4 or 5). Then we returned to the island for another evening of great food and stories by the campfire.

Sunday brought another beautiful day and we headed towards Slyne Head to see if we could get the Slyne Head Swimthrough that some of us had dived some years ago. Trainee cox’n at the helm, things got a bit testing as a mist descended and visibility on the water was reduced. It was a strange to see a yacht appear out of the mist coming straight at us, but with some skillful coxing we avoided any danger and continued the journey. We dived the swimthrough in the morning, what a dive, (well actually some of us did not go through the first time and stayed on the northside), but returned in the afternoon to do the dive again. It is a spectacular dive, swimming from the north side of Slyne head through the gully that starts at 28 metres in relative darkness, moves into lighter terrain, then into the black, then looking up into the deep purple, eventually getting lighter blue and then over to the southern side where the shallow water was teaming with life and huge numbers of jellyfish, only to continue on to further gullies, drop offs, beautiful ledges, masses of starfish on brown and pink encrusted algae. Just beautiful. The lunch break was spent on the pier of the lighthouse followed by a walk to both the old and new lighthouses. We then returned to the mainland to swap empties for the last full cylinder and back to Macdaras for a third evening. We had our final evening swim, then dinner followed by a walk to the west side of the Island to watch the sunset which did not disappoint. We enjoyed our final night by the campfire all exhausted but happy.

The final day Monday, started out with some light drizzle, again the crew did not bat an eyelid and got on with breakfast and the job of packing up camp, luckily the drizzle was shortlived and a relaxed breakfast was had by all. Aine, always with an eye for competition, organised a tent disassembling competition, the winners being Dave Moore and Tony Jie, their prize on the day was to help Aine take down the tent she shared with Chantal, this was a challenge too far for them as quite some time later Aine was still working out how to take down the tent, this time being helped by Joe (no sign of the winners, I might add). We headed back out to the Skerds to dive Doonguddle. This was a fantastic dive, stepping down to 40 metres with beautiful scenery and lots of life, crayfish, wrasse, blennys galore, it was a great way to end the weekend.

As with all weekends it is the crew that make it so good and we had a great group. Particular thanks go to Dave Moore, Steve Mulhall, Marty Baille Johnson, and Jimmy Furlong for all the work that is involved with towing, collecting trailers, boat gear etc, and thanks also to their able assistants, myself, Colm Lowney, Tony Jie who travelled with the towers and helped greatly with the job. Thanks to all the assistant coxn’s for all their enthusiasm and help over the weekend. It was a truly memorable weekend where the conditions, and the crew were just amazing. We could not have asked for more.

Hopefully it won’t be too long till the next club camping weekend away,