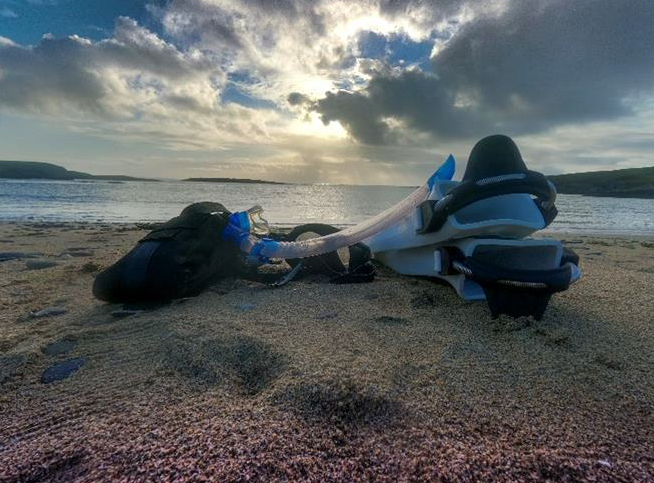 As a new member of Curragh Sub Aqua Club, I was delighted to secure a spot on the Barelycove weekend. Having trained abroad, my only experience diving in Ireland was limited mostly to The Mugglins. I was very excited to see what the North Atlantic had to offer.

John D was kind enough to give me a lift to Barleycove. We set off at 17:30 arriving at the same time as a few of the others under a beautiful, clear sky. The bay was sheltered, the water was calm and the location was perfect. I was already impressed.

Luke and Jimmy arrived shortly after that with Lír and Danu behind them. It had gone too late to launch the boats from Athakista, which was another 45-minute drive away, so instead we sat around the kitchen table, made plans for the morning and enjoyed a couple of refreshments. This, coupled with the drive down made for a good night sleep for those in the mobile homes.

A beautiful sunny start to Friday had everyone up and ready to go (relatively early). Luke, Jimmy and Ross got going early to launch the boats from Crookhaven and then Jimmy and Luke made the choppy crossing over to pick the rest of us up from Galleycove Beach. With weather promising to change for the worst, we wanted to make the most of our location. Everyone on board, we set off for Mizen. Looking back at the water behind me, I felt the rush of excitement one only gets from starting the day by heading out on a rib to dive.

As we approached Mizen, Luke slowed down and explained that if there was any sign of white water, we would need to change plan and dive elsewhere. As he said this, eruptions of white water blew out behind him so it was back to Galley Cove for a safer location. Here, the surface was calm, visibility was fantastic and water full of life. With Luke as my lead, we saw big spider crabs, conger eels and an octopus that did not seem bothered by our presence. We crossed over 3 ridges to a depth of 19m. It was then back to the surface and back to the beach. We anchored and headed for lunch.

At 4pm, we headed out again with a plan to dive a similar location. The water was slightly wilder but the scenery was spectacular. Luke gave us a guide to wrecks around the area, pointing out ‘Impatient’, which sank close to the viewing steps of the Mizen and Charlie Haughy’s yacht, ‘Taurima’ which sank right in the gap of the Mizen. For that afternoon’s dive, we had the choice of ‘Oswestry’ also known as ‘The Copper Wreck’ or ‘Irada’. Both very close together, but with Irada looking like the calmer surface, it was here we decided to descend. With Ciaran as the lead, we completed a square grid dive, which allowed us to take in a lot of this scattered cargo ship. Ross and Jimmy managed to find the boiler which is still very intact and now home to a large and proud lobster.

All safely back on board, it was back to base. Luke, Jimmy, John, Ciaran and Cristina then took on the timely task of bringing the boats to Ahakista, while Ross was busy at the stove preparing the other timely task of his beef and pineapple curry. Boats launched and curry simmering, it was definitely time for a post dive briefing at The Fastnet Pub in Goleen. Here a few more divers who had driven from Dublin that day met us and we caught up with some cold beverages in front of a hot fire. It was then back home again for some grub and a beverage or two. Tony was given some pointers on preparedness ahead of his coxswain exam to ensure he would arrive with confidence the next morning. I took some mental notes myself for when that day eventually comes.

Coffee drank and sandwiches packed, it was time to drive to Canty’s Cove where we would be met by Luke, John, Tony and Colm. They had the earlier start, having to again drive to Ahakista and then bring the boats across the increasingly choppy water to meet us. Kitted, briefed and life all jackets secured thanks to Tony’s keen eye, we set off hoping to dive another wreck, ‘The Iberian’, but we were again hampered with the dreaded white water. Winds were picking up. Luke, knowing the area so well had a back-up plan and brought us to Dunmanas Cove, which was teeming with life. Buddied with Luke again, he patiently waited and managed his sea sickness at the surface as best he could, while I got my SMB back together which had come undone when I hit the water. Below the surface, he clocked conger eels, a huge lobster, lots of cray fish, spider crabs and dog fish. Colin, Jean and Steve got to become more familiar with their rebreathers (impressive pieces of kit!) but Steve obtained a dry suit leak which, although gave him some monster calves, meant he would be dry coxing dive two.

Soup and sandwiches consumed, cylinders swapped out and even more wind and now rain moving in, it was time to go again. Luke’s local knowledge kept us safe again in Dunmanas Cove and he took one for the team by also dry coxing. The surface was rough so we quickly descended, this time buddied with Colm and John. Colm spotted a red blenny which was a first for me and John sighted a parade of shrimp under a ledge. With poorer visibility, keeping close to each other became the heightened focus as it was time to ascend. Everyone back on Danu and Lír, we held on and made our way back to Canty’s Cove.

Boats unloaded, Luke, John, Tony and Colm again had to make their way back across the bay to Ahakista while I made my way back to base to learn all about compressor duty. I had two patient tutors in Neil and Ross and the sidewards wind and lashing rain made it a most exciting experience. After some much needed refreshments and a swift debrief in Fastnet Pub, the rest of the crew made it back home but only for a short stint as it was then time for Ross’s taxi services to bring us to O’Sullivan’s in Crookhaven. Having missed the initial post dive brief, I was glad of the opportunity to discuss the day we’d had. Lots of stories shared, feeling mighty hydrated and becoming more accustomed to the club’s ethos and sense of humour – taking the absolute p*** out of each other, suddenly Ross’s taxi services were running again, this time to bring us all home. For this Ross, we thank you!

An early decision was made that we would stick to one dive today. With full on westerly winds now, we would need to change location again. Some of us were feeling a tad ‘sea sick’ so the dive was delayed until lunchtime. The plan was to meet kitted and briefed at Dooneen Pier at 1pm. A shore dive in a stunning location with spectacularly clear water and lots to see below the surface.

Upon resurfacing, it was time to take the boats out of the water at Ahakista. Through careful navigation and patience by Tony and Jimmy with the odd burst of speed and power, we got the boats out and on to the trailers. Jimmy set off back to Dublin with one trailer and a few more decided to call it a day there. For the rest of us stragglers, it was back to base camp again. I am sad to say that myself and my roomie, Sarah have a blank space here due to a ridiculously extensive nap. Safe to say though, for the divers who stayed awake, there was another post dive brief in a local establishment. Later on, we gathered at the house for our last evening and I learned about the club’s history, members and Neils love of his role as equipment officer. It was also here that we decided why not tackle one more dive in the morning before setting off. Jean busted out a block of fine Durrus soft cheese and toast which paired very well with the red wine which was going down easy. Back to the mobile home for my last night in very close but very comfortable quarters with Sarah.

The morning brought with it glorious sunshine and 6 remaining divers. We did a shore dive from Galley Cove beach hoping to bump into the friendly seal who had been curiously hanging around all weekend, but alas, we mostly just saw each other and plenty of sand. After John parted briefly with his buddy and briefly his fins and after Steve parted permanently with his mask it was time to pack up the cars for the last time and go. Luke was already on the road with the second trailer and we were not going to be long behind him.

I was blown away so much this weekend by the place, the visibility, the colours, the life, the logistics and the changing weather but more than anything I was blown away by the company of the club members. You are a hell of a group and I had an absolute blast. You are welcoming, patient, full of knowledge, kind and you each have a wicked sense of humour which is my personal favourite. PADI and my first group of diving friends got me to where I am and with you, I feel I’ll be able to reach lots more places and new heights (or even depths). A particular big thanks to Luke, without whom none of the above would have been possible.