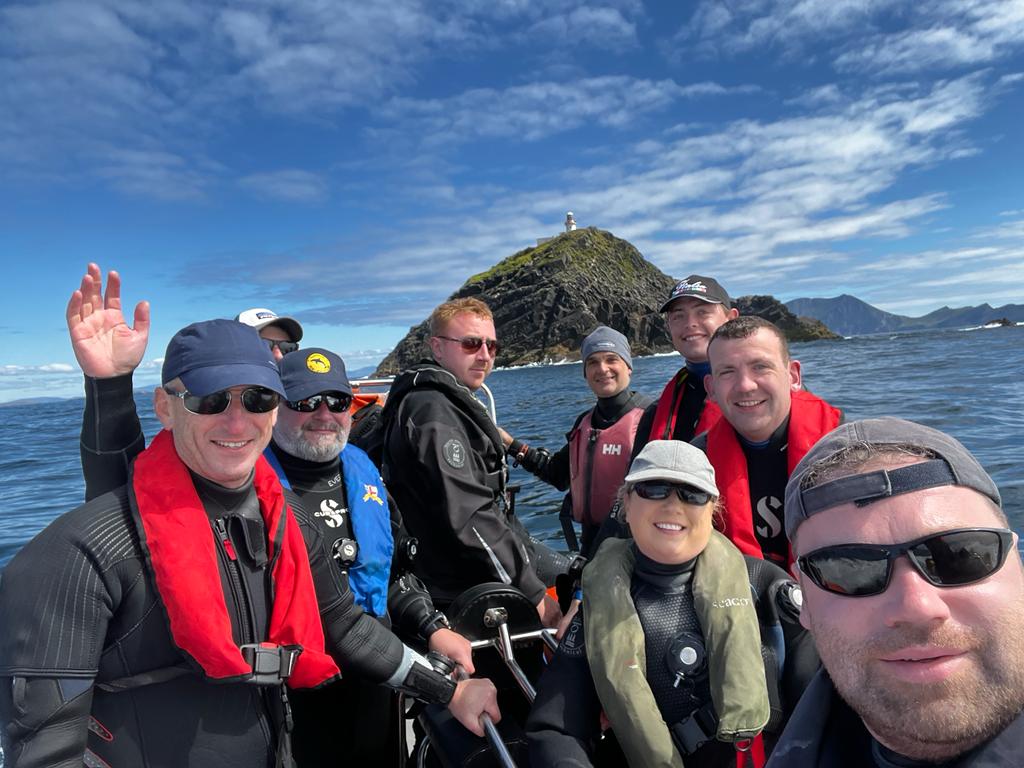 As is customary, the new member gets to draft the weekend dive report and that luxury falls to me.

The August bank-holiday trip took place in Doohoma head which is a picturesque location facing the north eastern end of the Achill island in Co Mayo. Travel time from Dublin was approx 4 hours taking it handy given the inclement driving conditions and the usual Bank Holiday traffic.

Dave & Luke towing Danú arrived first followed by myself, Lucinda and Marco. From here we unloaded the compressor then launched the boat. Dave suited up and moored Danú and we made tracks back to the B&B for the obligatory pint(s) and dinner.

Breakfast on day 1 kicked off at 08:00 (Food on plates at 8 as Luke put it), with dive briefing taking place on the slip at 09:00. Conditions on the morning of were ok but a little overcast. Briefing done, gear loaded, we were out onto the open water for the trip out to the Inishkea’s. Light sea’s made for a pleasant trip out however enroute a dorsal fin was spotted just off Duvillaun. It was initially thought we stubbled across a Basking shark and while not quite the case we had come across a very large Sunfish. A number of days later, a 3m specimen was spotted near the Aran Islands which very well could have been the one we saw. As far as starts go, this was an excellent one.

Gear on, buddy checks done, on to the main event!

Our chosen dive site on Inishkea was a gully between two outcrops of the island. Water temp, a balmy 16c and we started our decent down to 25m. In the gully, we had excellent vis, in the region of 10-15m and midway through the dive 4 grey seals took a passing interest in us, diving to the bottom gully.

Along the walls there was a vast array of life. These ranged from Jewel anemones, nudibranch, lobsters, crabs to a small conger eel. At the end of the gully we exited into a small kelp forest, popped the SMB and returned to the boat. An excellent spot to dive, full of life with interesting typography.

On a side point, this was my first dive on Nitrox which allowed me successfully complete the diving on Nitrox course, (thanks again to David Bannon for organising) and Lucinda for signing off on the practical, may the post dive fatigue be a thing of the past!

We landed on Inishkea south for lunch. Enroute into the pier, Dave M gave us the history of the island, The north / south divide, (not the Brexit one), Norwegian whalers and early potatoes crops on

the island. Sandwiches were provided by the B&B and were enjoyed by all. We then swapped over cylinders and gear was loaded back onto the boat.

Our second dive site was 15 mins from our lunch stop. Duvillaun has the appearance of an amphitheatre on the surface so hopes were high for a good dive, especially given the earlier Sun Fish activity. We rolled in an descended down to 25m in fractionally cooler water (15c). Vis was again excellent at 10m+. Lucinda and I followed the wall into a kelp forest whereas other went to the sandy bottom and saw sand eels. All in, very pleasant dive, the perfect way to round out day one.

Back to the slip, Dave M and John brought Danu back to the mooring, the rest of us were on compressor duty. Cyclinders filled, it was back to the accommodation for a pint and a bite to eat.

While we were diving, there was a fishing competition in the area. We arrived back to the accommodation to mackerel bbq’ing outside and a trophy full of whiskey being passed around to celebrate the biggest fish caught. This was absolutely fantastic, and contributed to a great atmosphere in the bar. Dining that evening was a fish buffet, which contained all the proceeds of that days competition, with lobster, crab and various other fish dishes on offer. An excellent feed and in lieu of payment, the only request was a donation to charity.

After the meal live music was provided and numerous pints and the odd red breast whiskey were consumed by those less concerned with by sleep.

Breakfast on day 2 commenced at 08:30. Those who braved the previous night’s proclivities leaned heavily on the coffee and the issue standard fry. Those of us who had semi drys retrieved them from the “drying room”, cursing that handing the suits only occurred to us sometime around 11pm the previous night.

Convening at the slip for 09:15, cyclinders and fuel were loaded, dive brief completed we then departed for Saddle Head.

First location of the day was Saddle Head on the north west tip of Achill. Weather by all accounts was absolutely fantastic, warm with very little wind however with all the gear and 9 divers progress out to the site was slow. Once onsite and geared up, in we went. Dive was very pleasant, water temp was 16 degrees and vis was excellent at 15m. Typography underwater was interesting with good life. During our ascent, myself and Dave M even managed to gate crash a shoal of mackerel. This was a surreal experience being surround by hundreds if not thousands of fish yet not one single one made any contact with us. Nature at it’s best!

Another point to note on the Saddle Head dive, Brian successfully completed his Nitrox dive practical so we were 2 from 2 on this trip.

Surface interval / lunch was observed on Achill which honestly with the weather we had was spectacular. Boat was anchored offshore and Dave M and Luke finned back in for the sandwiches. Given the distance to our second site (Blackrock) the decision was to observe some of our surface interval while we were travelling to Blackrock.

On to the last site of the trip, the far flung Blackrock light house, sadly more famously known for the Rescue 116 accident in 2017. The trip out from Achill took 25 mins and our designated site was on the west side of the island between two outcrops.

After a choppy entry, we decended down into a gully. This was a fantastic dive! Huge variety of life from lobsters at the bottom to the wall of jewel anemones down both sides. Depths reached ranged from 25-30m with great visability. The water temp was a little cooler than previous sites with a low of 13 degrees.

Once back on the surface we able to take in the spectacular sight that was the west side of Blackrock. Pictures don’t do it justice, the scale of it from the boat is really something to behold!

All gear stowed, we made our way back towards Doohoma. Near the shore we stubbled across a pod of dolphins. Once we got their attention they proceeded to follow the wake of the boat frequently breaching either side of the bow wave. This was a really great treat to end the days diving.

Back on dry land the final nights pints (pre & post dinner) were enjoyed in the beer garden given how spectacular the weather was.

The following morning high water was 10:30 so this was the perfect opportunity to get Danú out of the water and all the kit loaded. Admin complete, we departed Doohoma at 12:30 all very satisfied with a really excellent trip.

To close out the dive report we as a group want to acknowledge and thank both Luke and Dave M for organising such a enjoyable trip. Particular thanks to Luke as well for Dry Cox’n the two days as well as towing the equipment down. As a first timer on a club weekend, baseline has well and truly been set very high and the hope is all trips deliver in the same fashion as Doohoma did.