If Carlsberg Did Dive Weekends… 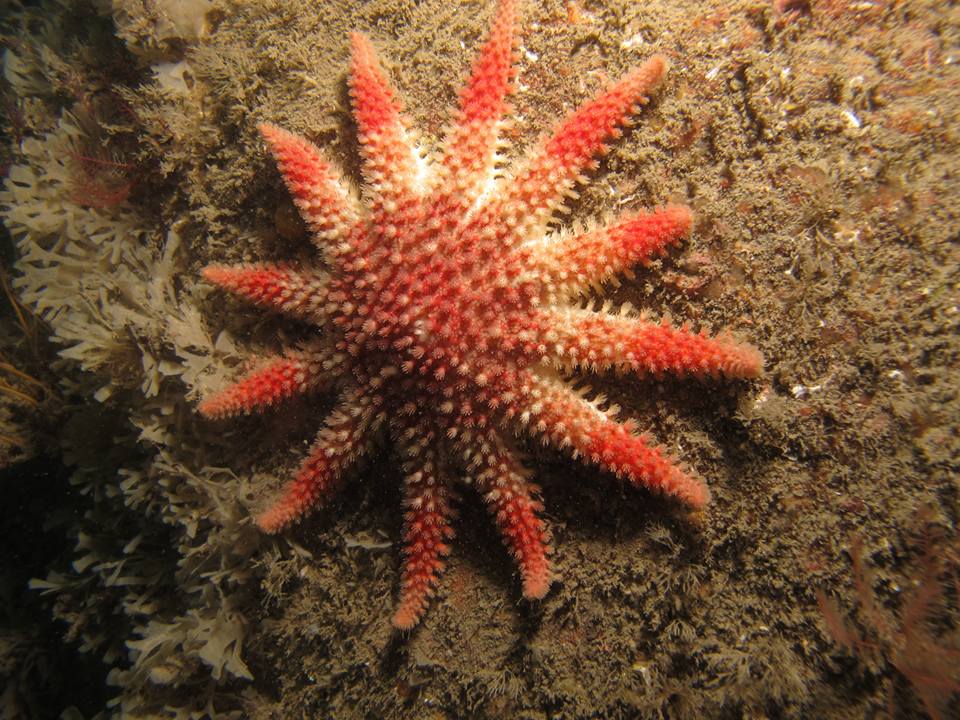 What in my opinion can only be described as the best club weekend in years. If you have not been diving in Quilty put it at the top of your list. We as a club will definitely be back.

We had a total of divers involved over the course of the weekend with 57 dives being completed in total. The weather gods smiled upon us for the first bank holiday this year. The “worst” the wind got to was gusting to F3 but generally it was F1 all weekend. The Atlantic Ocean doesn’t get any flatter than it was this past weekend.

On Saturday the 12 weekenders and 2 day trippers in Mick and Rhona headed out to Seal Rock for our first dive (this was the only site we revisited from last year). A cracking dive beginning in a very shallow gully that opens out into a cannon with sheer walls on either side  to 30m+. In the afternoon we dived the back of Mutton Island in the cave or at least what we believed to be a cave under the castle. What a few of us discovered thought was the cave is actually a very long arch. The seascape is largely completely bare rock that has been washed clean by thousands of round boulders when the Atlantic is at it’s fiercest.

On Sunday we began with Lime Rock, another wall that went to 30m and an abundance of life all along. There are also a number of “chimneys” dotted along the wall some up to 10m deep again formed but boulders being washed around during storms. Laura and myself were lucky to happen upon one just as the end of our dive and completed our safety stop swimming up through it and happening upon a fish nursery. One Mark Seavers described it as the best wall on the west coast – little did he know what was to come…

For the afternoon dive we headed out to Grundel Rock which is a very exposed site and can only be dived in perfect conditions (did I mention that we had said perfect conditions all weekend). The top of Grundel breaks the surface at nearly all times you will at least see breakers at high tide. but a mere 20m east or west of the breakers and we got 65m+ on the sounder. To call this site a rock is incorrect – it’s a wall that runs for roughly 1k in an North – South direction, and my god the life – Crays, congers, Nudis, even a beautiful monkfish amongst the usual suspects. There was no need to ask people what they thought after the smiles on their faces afterwards told the story, though Mark’s first words on surfacing were ok I take it back the wall earlier wasn’t the best, that thing (Grundel) is Jurassic. After we filled we decided to have a traditional woolly bear pint – but get this we had to do it in shorts and flipflops!!! That evening we had dinner in The Old Bakehouse in Miltown Malbay and as was the same last year it didn’t disappoint. After back and base in the houses the party went on into the small hours.

On Monday morning with a number of people having to hit the road back to Dublin early and one or two falling victim to the previous nights festivities. A small crew of headed out for one final dive. It’s a dive which I have only done once before some 4 or 5 years ago, and have been eager to get back to. The site is actually half way between Kilkee and Quilty. Would I remember where it was, would it be as good as I remembered. There’s only so much information I could source from Google Earth. And then as look would have it I saw on fb that others had dived in the previous day. So off we headed to Blue Pool, my memory hasn’t started to fail just yet and we found it with easy less than a 20min boat trip from Seafield Harbour. This dive beings on a cliff face in open ocean. You drop into a gully at 35m and follow it along all the way keeping to left. If timed correctly the gully slowly closes in and it looks like you have come to a dead end but then you look up and there is a letter box shaped opening that leads you into the inside of the cliffs and inside the blue pool at 5m perfect for your safety stop. The site is home to an army of spider crab. On my last visit I watched two mate. This time I witnessed a female open her pouch and attend to the eggs. We also stumbled across a lobster tucking into one of the arm for lunch. There were Nudis to beat the band too.

If the above didn’t sound good enough – we had dolphins every day on the boat trips!

As an added bonus Shish and ODog are now fully fledged Nitrox divers, and in the process I also got my last tick to be a Nitrox Instructor.

A few thanks you’s without whom it wouldn’t have happened – Marco who did all the ground work in organising the housing, and mooring – all despite the fact he knew he wouldn’t be able to attend (though he and Lu are in El Hierro so I haven’t that much sympathy). Neill/Gerry for towing Lir, Andy/Michelle for towing Danu. I popped my towing cherry and took the compressors. Shish and Fiona – I don’t think I saw either more than 5m away from the compressors all weekend. I may have missed others if I have I apologise, but your contribution over the course of the weekend didn’t go unnoticed.

Next stop Narvik for a lucky few this weekend, but do keep an eye out for the call for Malin Head over the August bank holiday (I’ll let you in on a secret in my eyes it’s as good as and may possibly be better than Quilty)